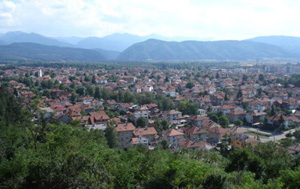 Samokov is the centre of the county of 24 settlements. It has a picturesque location in the northern foothills of the Rila mountains, on the Iskar River, altitude of 950 m above sea level, with a cool summer and snowy winter with a lot of sunny days. The oldest winter resort in Bulgaria, Borovets, is only 10 km from the town, with wonderful facilities for winter sports. In the summer well-marked tourist routes and echo paths lead to the highest summit in the Balkans Musalla (2925 m high), to Malyovitsa and the Seven Lakes.

Samokov is one of the 100 national tourist sites, only 60 km from the capital Sofia and 110 km from Plovdiv, with which regular bus lines are connected to.

Samokov Before and Now 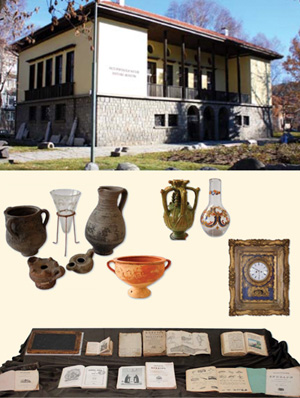 The resort historic heritage of Samokov has been presented in the Historical Museum in a range of thematic exhibits. The name of the town is a noticeable cultural fact and reflects its rise and development associated with its huge mechanical hammers for blacksmith work referred to as “samokovi – self forging”.

As a centre of the Samokov eparchy (1557 – 1908) Samokov played a crucial part in supporting the Orthodoxy and the Bulgarian script and culture. Since the middle of 17th century there has been a monastery school in the bishop’s church which in 1800 was a municipal one with its new building and school safe.

Samokov has given two of the main achievements of the new age to the Bulgarian people – the Bulgarian printing machine of Nicola Karastoyanov (1828) and the first Bulgarian magazine “Luboslovie” of Constantine Photinov (1844) and both are exhibits at the museum.

The school regulations of the Samokov male school of 1861, photos of teachers and pupils reminds that Samokov during the Renaissance was one of the significant educational centres of the Bulgarian people. 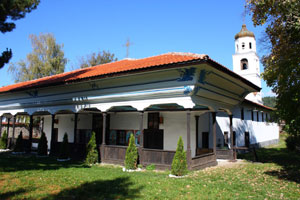 The Bishop’s church “Uspenie na presveta Bogoroditsa - the Assumption”, headquarters of the Bishop of the eparchy of Samokov was built in 1712 as a one-throne church. During the period 1783 – 1795, extension and reorganisation were carried out which end in 1835 of both side oltars. Part of the large icons were made in Sveta Gora (Mount Athos) while the woodcarving iconostasis was ordered around 1793 of the master Andonius in some of the Mount Athos monasteries. Part of the Sunday icons was work of Christo Dimitrov (1745 – 1819). After the second great reorganisation of the church the iconostasis was extended by master Atanas Teladur, whilst the icons were extended by Dimitar Zograph, Ivan Ikonopisets, Nicola Obrazopisov and other representatives of the Samokov art school.

After the liberationр the narthex with the colonnade was built, while in 1892 the bell-tower. The Tap was built in 1870. 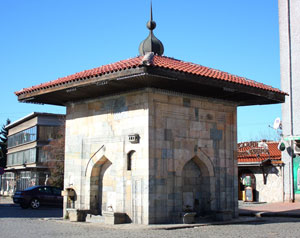 The Great Tap is a monument of culture, social building from 17th century in the Ottoman Empire style. It was built as a charity establishment by the manager of the Sultan kitchen around 1660. This square tap has got stone sculpture – unique earring, fountain and a small house for birds, etc. A spring of tasty and cold water has been lead off through wooden pipes. Thence the legend that whoever drinks water from the Tap will settle in the town for good. 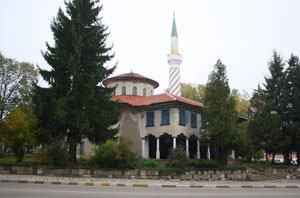 Bairakly Mosque is open as a museum. Restored monument of culture. It is the only preserved mosque from the Ottoman domination time. This is the so called the Old Mosque thoroughly reorganized in the middle of 19th century and painted around 1945 by the icon-painters of Samokov Ivan Iconopisets, Kosta Valyov and Christo Yovevich in the decorative style of the Samokov Art School.

The photographic exhibition “Samokov through lens”. Its exhibits reflect the change in the town environment at the end of 19th century and the first half of 20th century. 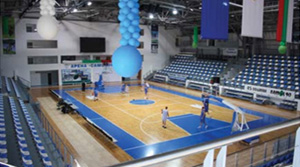 Samokov is a town of sports with a variety of sports amusement for its guests.

Multifunctional sports centre “Samokov” with 2346 seats and facilities for 26 kinds of sport was built by the municipality of Samokov in 2008. Basketball tournaments, qualifications in handball, volleyball, sambo, sports acrobatics, etc. have been provided in it. A four-star hotel with 146 beds, spa centre and an indoor swimming pool is associated with the centre. 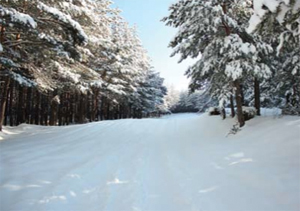 The skating rink in the square and the ski run “Borichko” on the Rido Hill, equipped with two-seat lift, offer excellent conditions for winter sports – winter skates, skis and sledges.